Pics by Dave the Pap

A NEW study of Amy Winehouse, commissioned by her father, has been created by Liverpool artist Anthony Brown.

It will  go on show in London as the centrepiece of his first show in the capital.

The exhibition, at a venue in the Kings Cross area, will also feature Brown’s Talking Heads works on the Beatles, Brian Epstein, David Bowie and Jimi Hendrix. 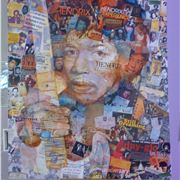 Jimi Hendrix study,
bought byDavid Gest,
fetched £15k at auctionBrown has collaborated with Mitch Winehouse and the Amy Winehouse Foundation on the picture of the singer who died on July 23 last year, aged just 27.

If the work, seen here for the first time, is auctioned it could raise thousands of pounds for the trust set up in Amy’s name to help young people with life problems.

Brown told Liverpool Confidential: "I’ve always been a great fan of Amy Winehouse. I always regarded her as a real person with a real heart. 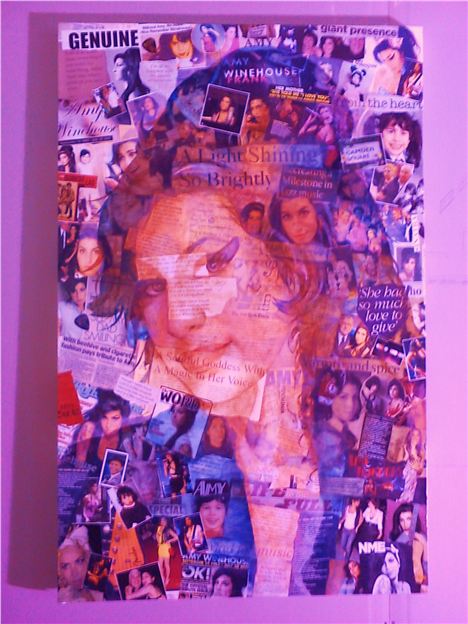 “When she died I was shocked and stunned but at that time never imagined doing a painting of her. As I did my research for this work I found lots of materials, but I was staggered by the amount of negativity surrounding her life, sad for such a beautiful person. 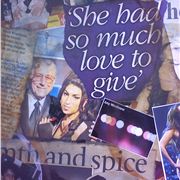 Click to enlarge“I hope my work truly captures the spirit of Amy. It is still unfinished but I am happy with what I have achieved so far.”

Earlier this year a Talking Head painting of Jimi Hendrix, bought for £5,000 by ex Mr Liza Minnelli David Gest raised around £15,000 at a charity auction.

Brown’s work featured prominently during Liverpool’s year as European Capital of Culture with his distinctive Talking Heads collection taking to the roads of Merseyside to be exhibited in a wide range of venues.

At one recent taster meeting in London with a group of lawyers, representing high-level clients, one commented that Brown’s creations were ‘just photographs overlaid with newspaper clippings’. When it was pointed out they were actually oil paintings, the legal eagles were apparently stunned.

The big question is what will be the reaction of a London audience to his distinctive work.

Brown, artist, graphic designer and musician, should know the answer as soon as his exhibition opens at the end of this month. 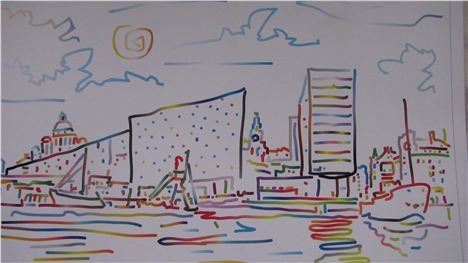 Meanwhile Talking Heads and other Brown creations have gone on public display from this week in empty units at Mann Island – yes that familiar love-it-or-hate-it, granite-lined Neptune development.

Over the coming weeks, Brown will be creating a new work, inspired by the Mann Island developments, currentlly up for the Carbuncle Cup. As the work is executed a time-lapse camera will capture the artist at work, resulting in a start-to-finish 30-minute film of the new painting. 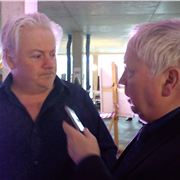 Anthony Brown talks
to Larry Neild who
appears to be textingThe 6ft by 7ft work will follow the Talking Heads style that has become the signature of Anthony Brown’s work, using oils, photographs and documents, to create a tapestry-like painting.

*Anthony Brown’s Living Art Project continues at Mann Island for some months. No set opening times at the moment, but when the artist is busy at work he can be seen through the windows. The aim is to open the building several times a week to enable viewing of his works on display. It will be open to the public this Friday when the QEII is in town. A new £5.6M woodland retreat has been approved